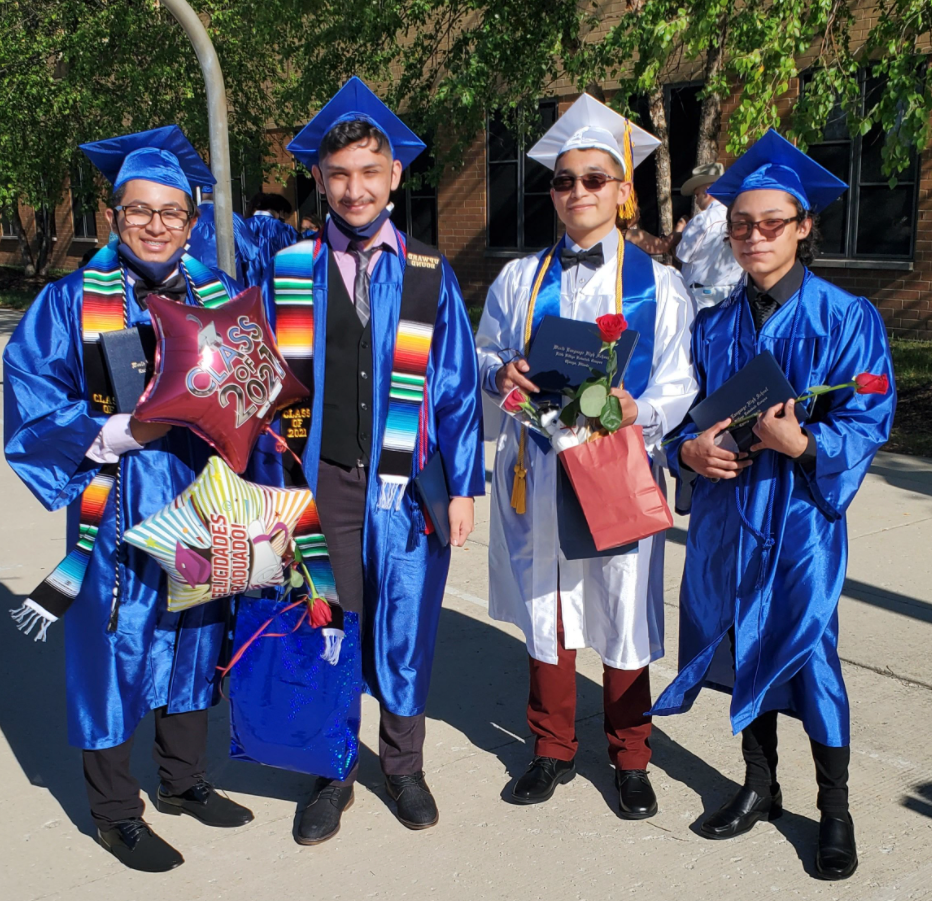 Faced with increased violence in Little Village, our approach emphasizes “there’s more to being a man”

Despite the challenges caused by COVID-19 and remote learning over the last seventeen months, a unique violence prevention program for teen boys saw 98% of its seniors graduate from high school in 2020 and 2021. Options for Youth’s “What’s Up with Manhood?” program works with teen boys in Chicago’s Little Village neighborhood to prevent high school dropout and to reduce the impact of violence in their young lives.

A total of 45 senior participants in the What’s Up program at World Language High School in Little Village graduated in 2020 and 2021 during the ongoing pandemic, with 100% accepted into college or trade school. A majority of the graduates had been with the program since their freshman year of high school. Read the full press release here. 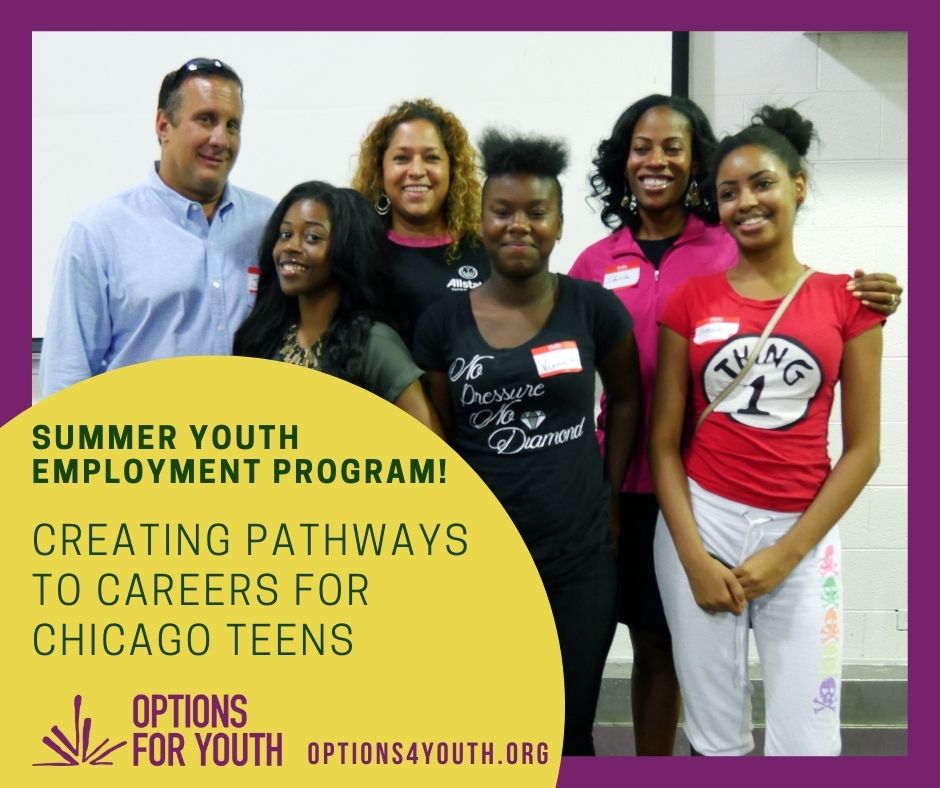 Options for Youth works with at-risk adolescents on the South and West Sides of Chicago to help them maximize their potential to achieve academic and life success. By supporting and empowering the most vulnerable groups of adolescents in our city, we are helping to break the cycle of poverty and we know that community partnerships make all the difference!

We are currently looking for corporate sponsors for our Summer Youth Employment Training (SYEP) which provides valuable job-skills training to 60 young men and women (ages 16-19) each summer. In partnership with One Summer Chicago, our program offers hands-on experiences to at-risk teens with the goal of increasing engagement in the workforce and in their own communities during summer break. Click here for more information on this invaluable opportunity! 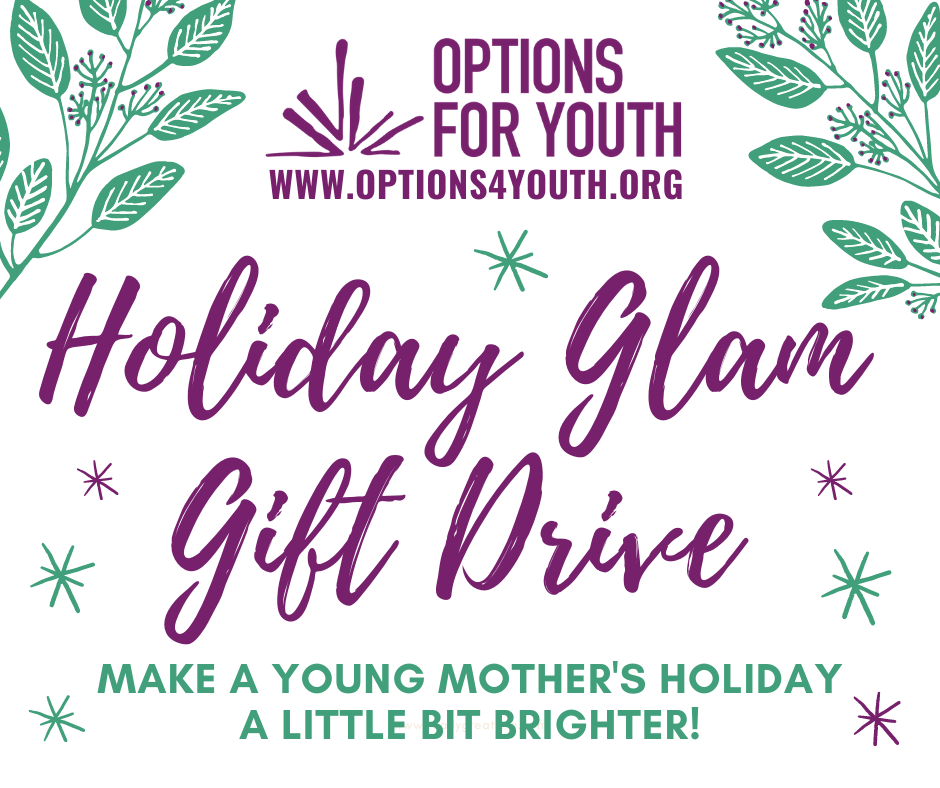 You can help make a young mother’s holiday a little bit brighter this year! Options for Youth is collecting beauty products and gift cards to fill holiday gift bags for the teen mothers participating in our programs!

Options for Youth currently has over 100 teen mothers in our programs (all with children under 3 years old and all attending high school remotely). These young women are working hard to stay in school AND raise their children at the same time which is not an easy task! Every day they overcome significant obstacles to achieve success. Your holiday gift donation is truly appreciated!

Donations can be mailed to Options For Youth by December 10th at 5234 S. Blackstone, Suite H, Chicago IL 60615. If dropping off donations please email angie@options4youth.org to arrange a time. Pick ups can be arranged for bulk donations as well. Please ensure that all products are unopened and non-expired. Monetary donations can be made by clicking here. Click here to see the attached flyer for more details. 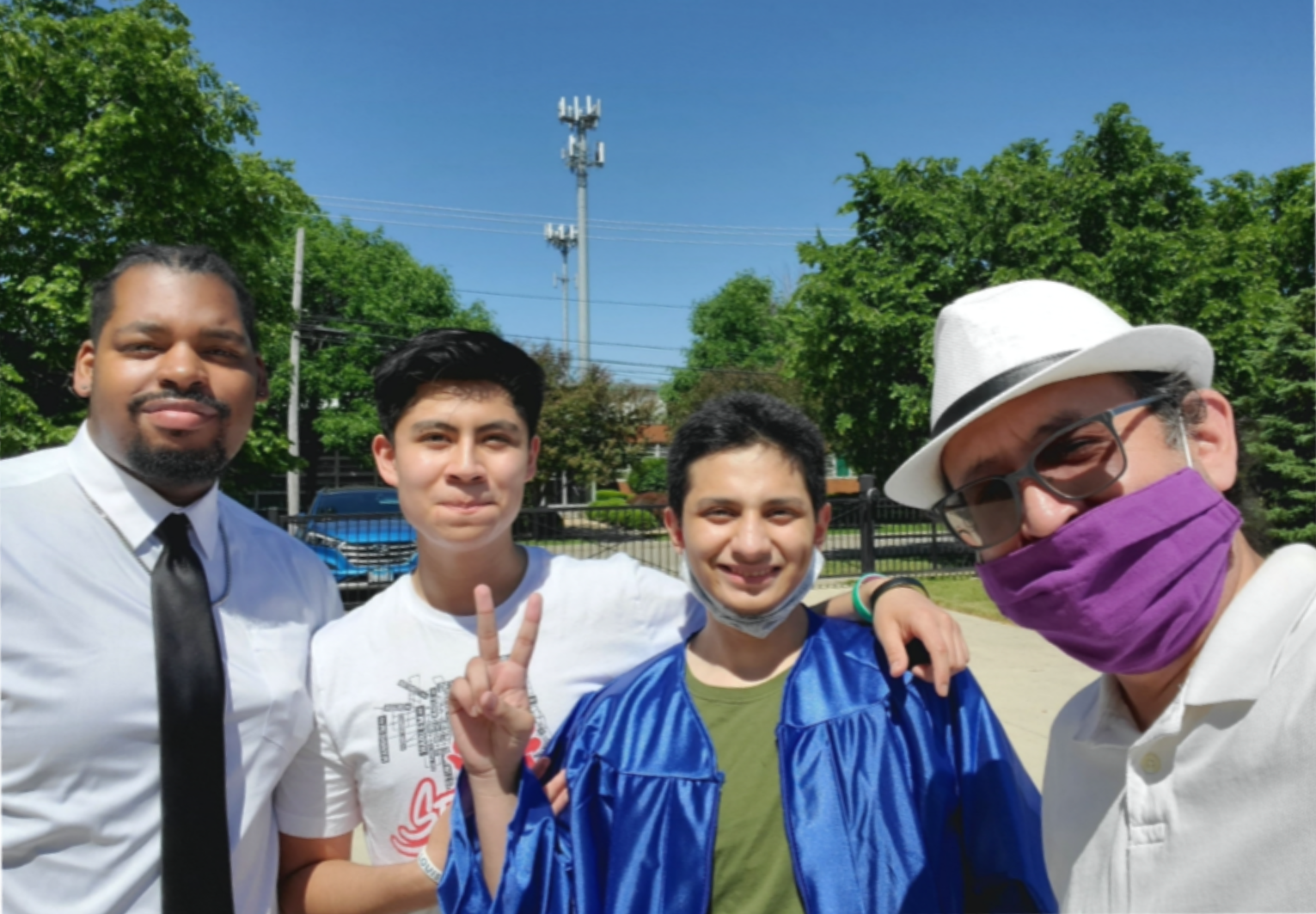 Despite the challenges caused by COVID-19 isolation and remote learning, a unique violence prevention program for teen boys saw 100% of its seniors graduate from high school this month. All 34 of the seniors in the “What’s Up with Manhood” program at World Language High School in Little Village graduated, and 80% have been accepted into college or trade school.

Options for Youth’s “What’s Up with Manhood?” program provides a new approach to reducing the impact of violence in the lives of adolescent boys in Chicago’s Little Village neighborhood. Chicago-based Options for Youth partnered with Promundo, a global leader in working with men and boys for gender justice and violence reduction, to develop the What’s Up with Manhood? curriculum, a gender transformative curriculum that helps young men growing up in one of Chicago’s most underserved neighborhoods think critically about “what it means to be a man” in their community.

Since 2017, 107 teenage boys participated in the What’s Up program. All are minority and growing up in in a neighborhood where one-third of the families live in poverty. Fewer than half of the high school students in Little Village graduate each year and only 6% graduate from college. This year, with COVID isolation, participants faced increased obstacles as they neared graduation and many had to keep up with schoolwork on cell phones because they had no computer or internet in their home. 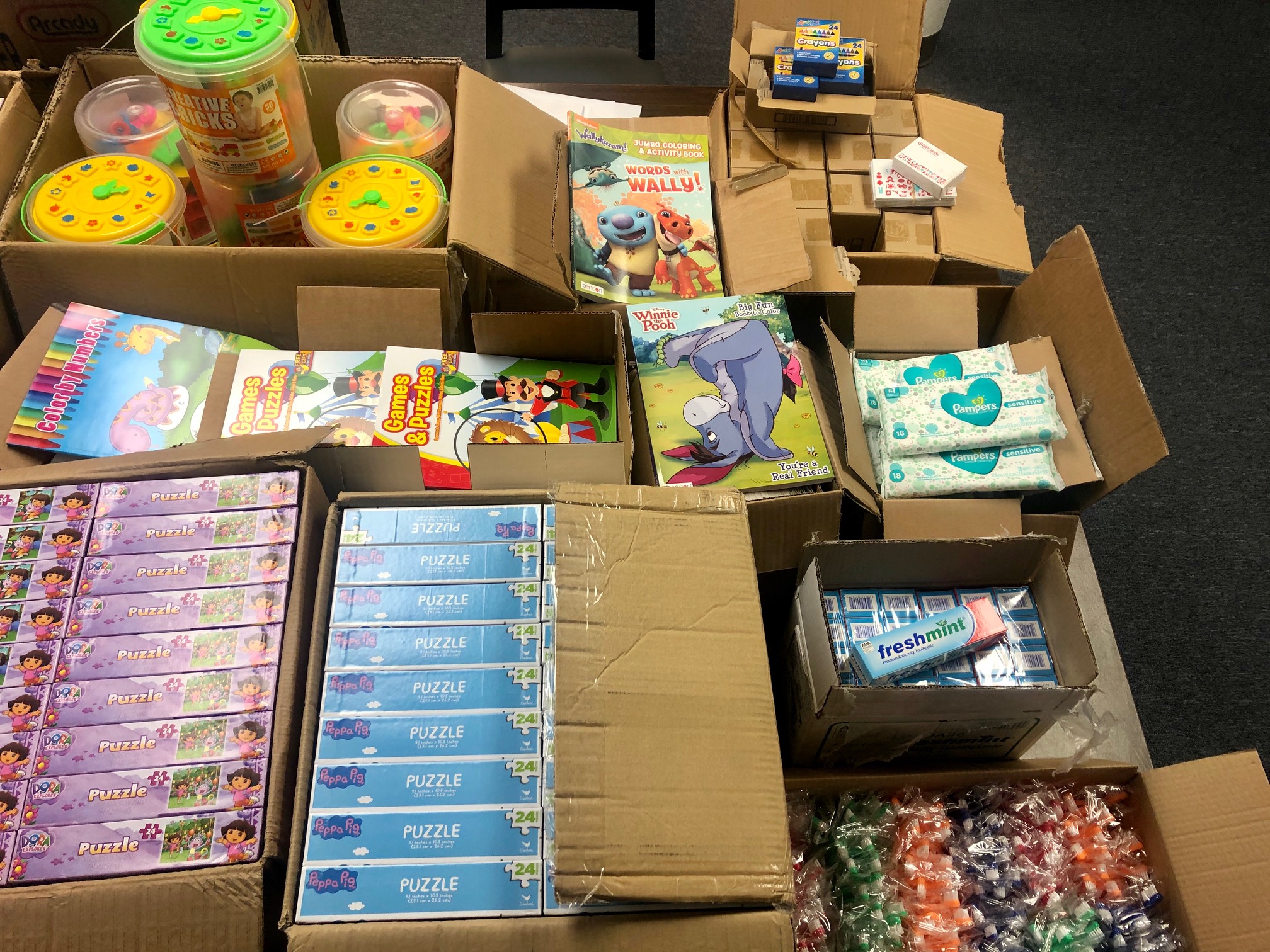 Once again, the Logan Foundation flies to the rescue, just like Superman. OFY Home Visitors are thrilled by the recent delivery of boxes and boxes of supplies for our at-risk teen families as they shelter in place and try to stay safe. Groceries, household supplies (such as wipes and soaps), books for reading to their babies, and so much more, will make a huge difference in the lives of these young parents and their babies.

Options for Youth is very grateful to the Reva & David Logan Foundation for the gift of one-hundred coats for the children of participants in the Options Prevention Initiative and Subsequent Pregnancy Program. 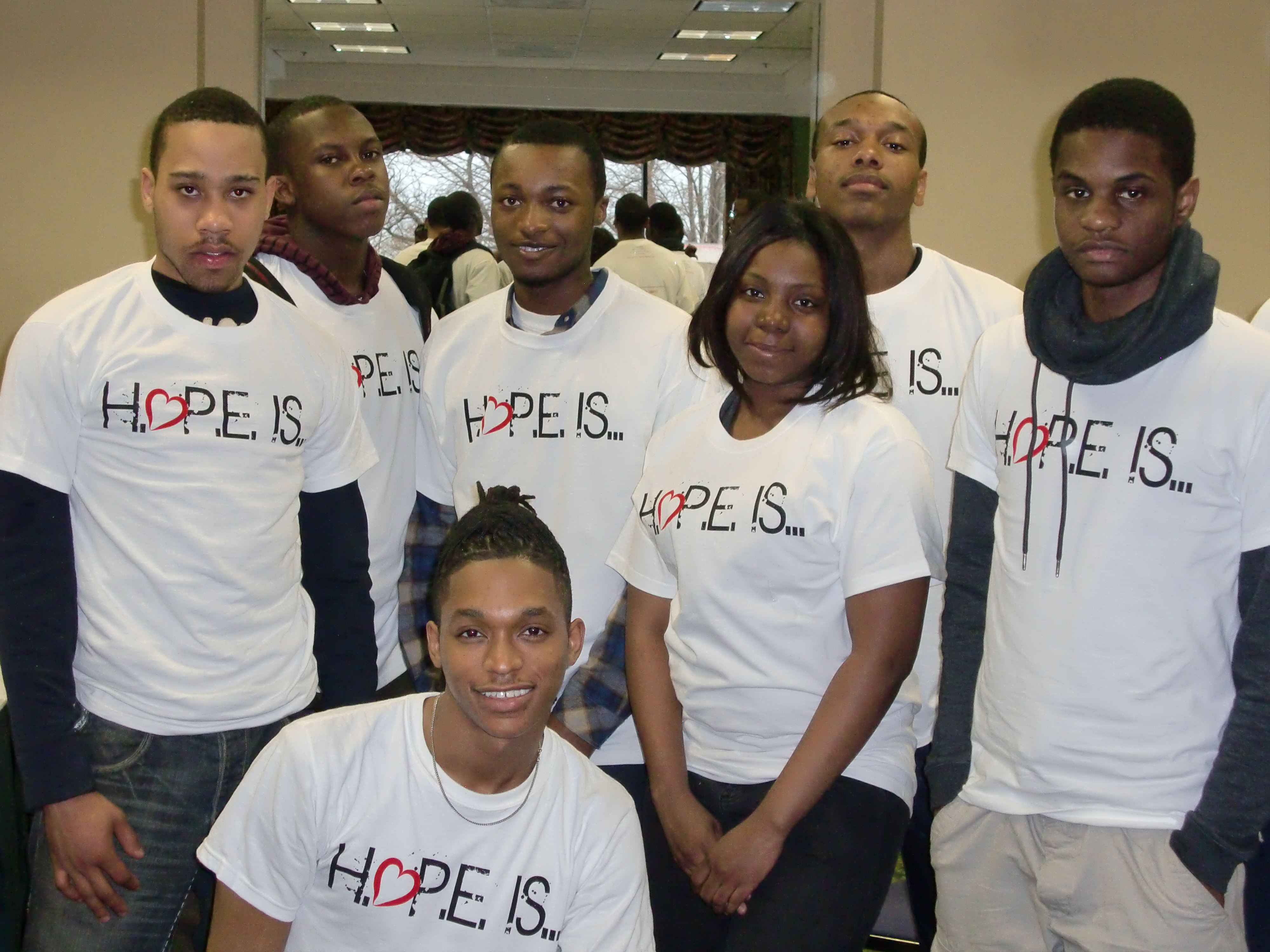 OFY has been in the news a lot recently. Read the Chicago Tribune article by Kate Thayer about the new Illinois law that impacts schools and teen mothers who want to breastfeed, Student moms who breast-feed will get space at schools under new Illinois law.

Then follow the breastfeeding discussion as it continues with Pat Mosena on the 21stshow.org with Alan Montecillo.

And Kate Thayer at the Trib returns with another article, this one on Teen program combats violence by challenging macho stereotypes, highlighting the new OFY “What’s Up with Manhood?” initiative. 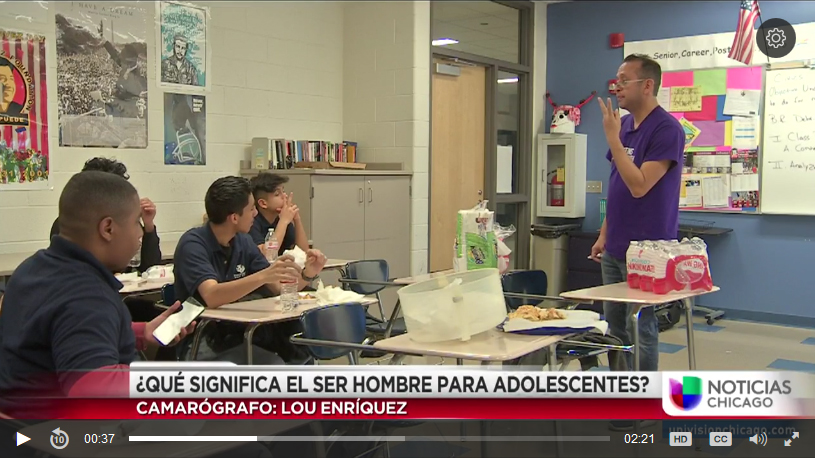 Male students at Little Village Academy are guided by their mentor Luciano Medellín from Options for Youth, as they discuss the true meaning of being men. “What’s Up with Manhood” is a new initiative being piloted by Options for Youth in partnership with Promundo, and is supported in part by the Mayor’s Mentoring Initiative in Chicago. Click here for Univision video. 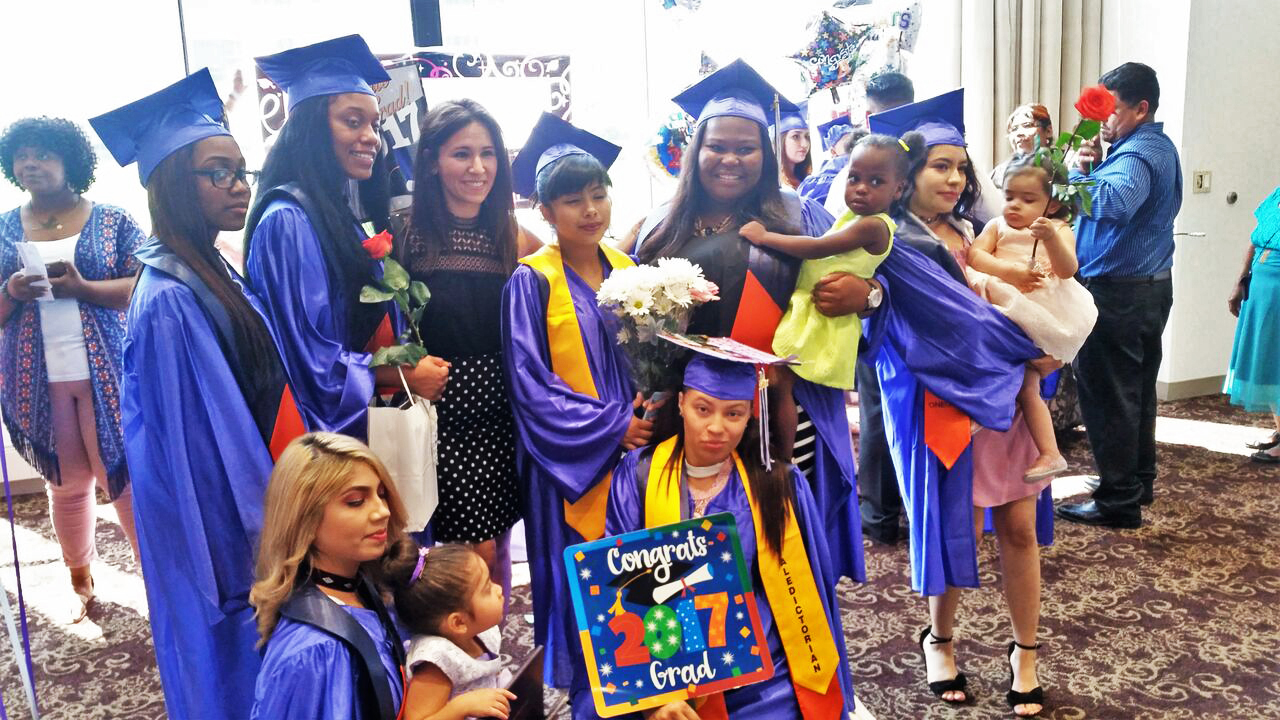 Options for Youth graduated its first class of Subsequent Pregnancy Program (SPP) participants at Simpson Academy on June 15. At the end of the first year of the new North Lawndale program, participant outcomes were exceptional.

Among the 25 very young mothers who participated in the North Lawndale Subsequent Pregnancy Program, there were no second pregnancies during the program year. All nine of the participants eligible to graduate received their high school diplomas in June. One SPP participant was Valedictorian and another was Salutatorian of the 2017 graduating class. The guest speaker for commencement was a former SPP graduate, who is currently enrolled at Notre Dame, working toward her JD degree.

In September, 2015, Options for Youth funding was abruptly cut by the State of Illinois. The OFY Board and staff made the strategic decision to not abandon these young mothers, but to rebuild the Subsequent Pregnancy Program one site at a time, beginning with North Lawndale. North Lawndale was chosen to be the first new site because teen birth rates there are among the highest in the city of Chicago. Each year, one quarter (24.3%) of the babies born in North Lawndale are born to 15- to 19-year-olds. This high proportion of teen births in North Lawndale suggests limited access to reproductive health information and services to young people growing up in this community.

With generous support from the Steans Family Foundation, the Chicago Community Trust, and the Allstate Insurance Company, the new North Lawndale Subsequent Pregnancy Program was begun in November, 2016. 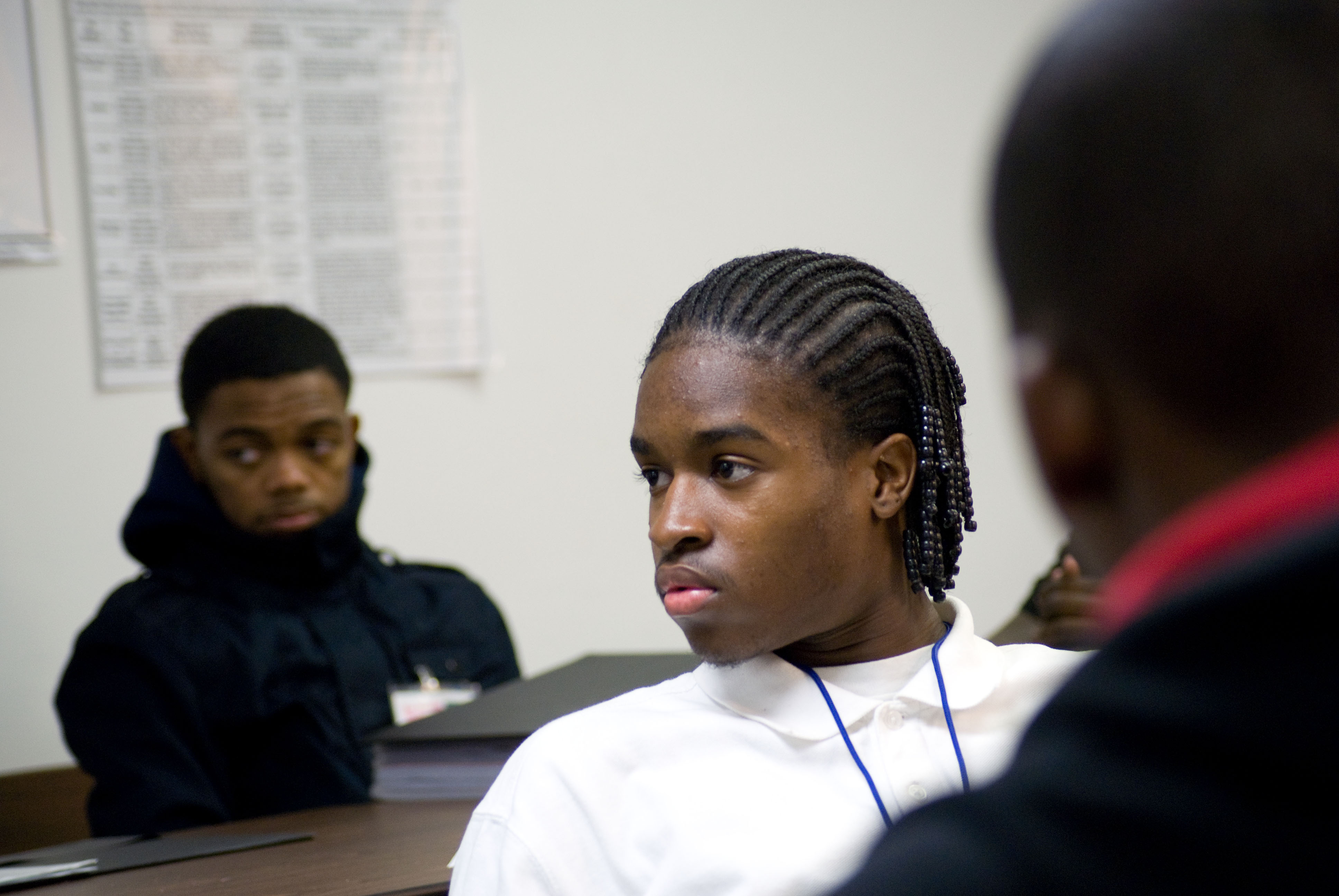 Options for Youth held its first advisory meeting for a new initiative, “What’s Up with Manhood?” on June 22. Participants from numerous social service programs, nonprofit agencies, and city and county departments discussed this unique approach for helping young men deal with the violence in their everyday lives.

Participants at the meeting agreed on the need for a long-term commitment to help break the cycle of violence among vulnerable adolescents. “What’s Up with Manhood?” helps young men think critically about how manhood is defined in their own community, and how negative stereotypes of manhood are linked to violence in their daily lives.

In April, Options for Youth began a pilot program with 24 teenage male students in the Little Village neighborhood. After three months, the response has been extremely positive, with the young male participants’ apprehension being replaced by the need to talk openly. As Options president Pat W. Mosena reminded the advisory group, “It’s one kid at a time. And these young men can then become change agents in their own communities.”

Options for Youth Needs your Help!

Help our young families in need during the COVID-19 crisis! Options for Youth’s Home Visitors are determined to continue supporting the hundreds of families and adolescents in our programs, but we need your help. Your donation provides essentials for our participants, including formula, diapers, groceries, and books. Thank you for your support!