The two most critical factors determining the life course of adolescent mothers are high school graduation and subsequent childbearing. Each time a teen mother graduates from high school and delays a second pregnancy, she carves a new path for herself and her family.

The Illinois Subsequent Pregnancy Program (ISPP) was one of the few programs in the country that focuses on delaying a “second” pregnancy among adolescent mothers. This program grew directly out of empirical research on adolescent welfare mothers in Chicago which suggested that teen mothers could make it with one child, but a second baby while still a teenager most often meant high school dropout and welfare dependency (Mosena, UChicago, 1986).

ISPP provided an integrated model of adolescent service delivery with intensive home visiting and group training. OFY staff had the unique opportunity to develop the program model, curriculum, and record-keeping system working with ISPP Home Visitors in seven local agencies serving teen mothers in 52 communities across the state of Illinois. Among 5,000 first time adolescent mothers who participated in ISPP: 97% delayed a second pregnancy and 95% remained in or graduated from high school. The MacArthur Foundation supported a ten-year evaluation of the state-wide program, which reported that high school graduation rates among adolescent mothers were twice the national average for parenting teens (Philliber Research, 2011). Despite the effectiveness of the Illinois Subsequent Pregnancy Program, the 2015 state budget crisis and the new administration in Springfield decided that teen mothers were no longer a priority and all SPP project funding was stopped.

ISPP supported participants through two primary interventions: a personal, long-term relationship with a home visitor and intense training through group participation. Second-year participants were trained to work as Subsequent Pregnancy Peer Educators in their own schools and communities. Participants were African American, Caucasian, Mexican and Puerto Rican, ages 12-18.

After participating in ISPP for one year and completing eight weeks of summer training, young mothers could become Subsequent Pregnancy Peer Educators. As Peer Educators, they worked with hundreds of first-time adolescent mothers through school and community presentations and one-on-one communication. 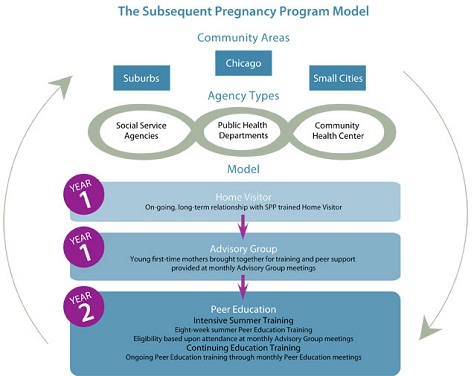 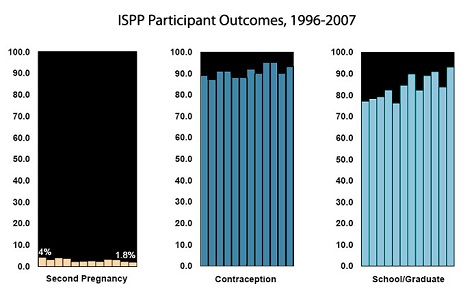